Book a party at our clubhouse.

Christmas in the Mansion: 2020 Version

The Woman’s Club of Erie is offering the community a 40-minute tour of its Club House on Sunday, November 22 from noon until 5:00 p.m. at no charge. Two floors of the mansion will be decorated for the holidays by the members. In addition, similar to prior years, decorated miniature Christmas trees, wreaths and themed baskets will be raffled off. To view the over 50 items and purchase benefit raffle tickets on line, click here. Due to COVID-19, CDC Guidelines will be followed including: face masks, social distancing, signing in and out on Contact Tracing Log, hand sanitizer and temperature taken. In order to practice social distancing while visiting the mansion, attendees are asked to call or email Judy Santone Husted (814-397-4644 or santonejudy1@gmail.com) to schedule an appropriate time.

In spirit of the holiday season, a special dinner will be available for carry out on Tuesday, November 17. The $15.00 dinner consists of: Swedish meatballs, rolls/bread, salad, scalloped potatoes, vegetable, deviled eggs, and dessert. To place a dinner order, call Marci Cashman at 814-450-3199 and provide credit card information.

The 19th Amendment and women’s right to vote turn 100 years old today–August 26! The Woman’s Club of Erie is honoring this milestone in American history by illuminating our historic Club House in #PurpleAndGold. Learn why at: womensvote100.org/forwardintolight #ForwardIntoLight.

The illumination of the Woman’s Club in purple and gold is in collaboration with buildings and landmarks across the country to celebrate the 100th anniversary of the 19th Amendment and women’s right to vote. This nationwide celebration of the centennial is named for the historical suffrage slogan, “Forward through the Darkness, Forward into Light.

We are proud to participate in #ForwardIntoLight to amplify the important history of women’s fight for the vote and to honor the centennial of the 19th Amendment.

Thank you to all our supporters during Erie Gives 2020!

Amendment XIX: The right of citizens of the United States to vote shall not be denied or abridged by the United States or by any state on account of sex. Congress shall have power to enforce this article by appropriate legislation. Adopted August 16, 1920. 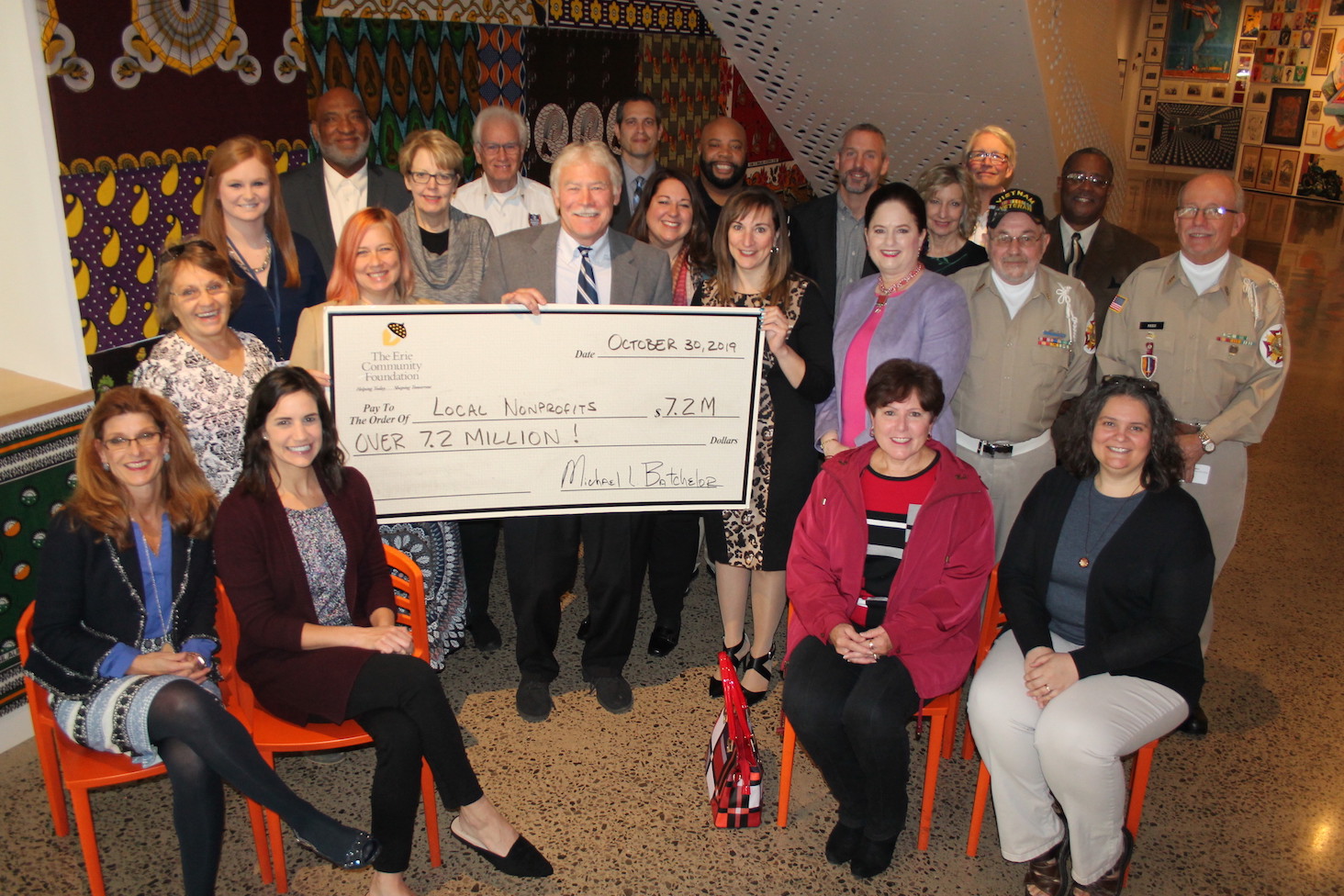 The Erie Community Foundation awarded $7.2 million to Erie area nonprofits during their Fall Grant Reception hosted by the Erie Art Museum on October 30. The Woman’s Club of Erie was one of three Urgent Grant recipients in the amount of $7,717.00 to cover the outside water line break expenses and one of the 14 nonprofits to receive a Helping Today Grant in the amount of $4,000.00 for “Setting a Course for the Next 120 Years.”

The Woman’s Club is extremely grateful for the support of The Erie Community Foundation and their confidence in the Mission activities and preservation efforts of the Club. 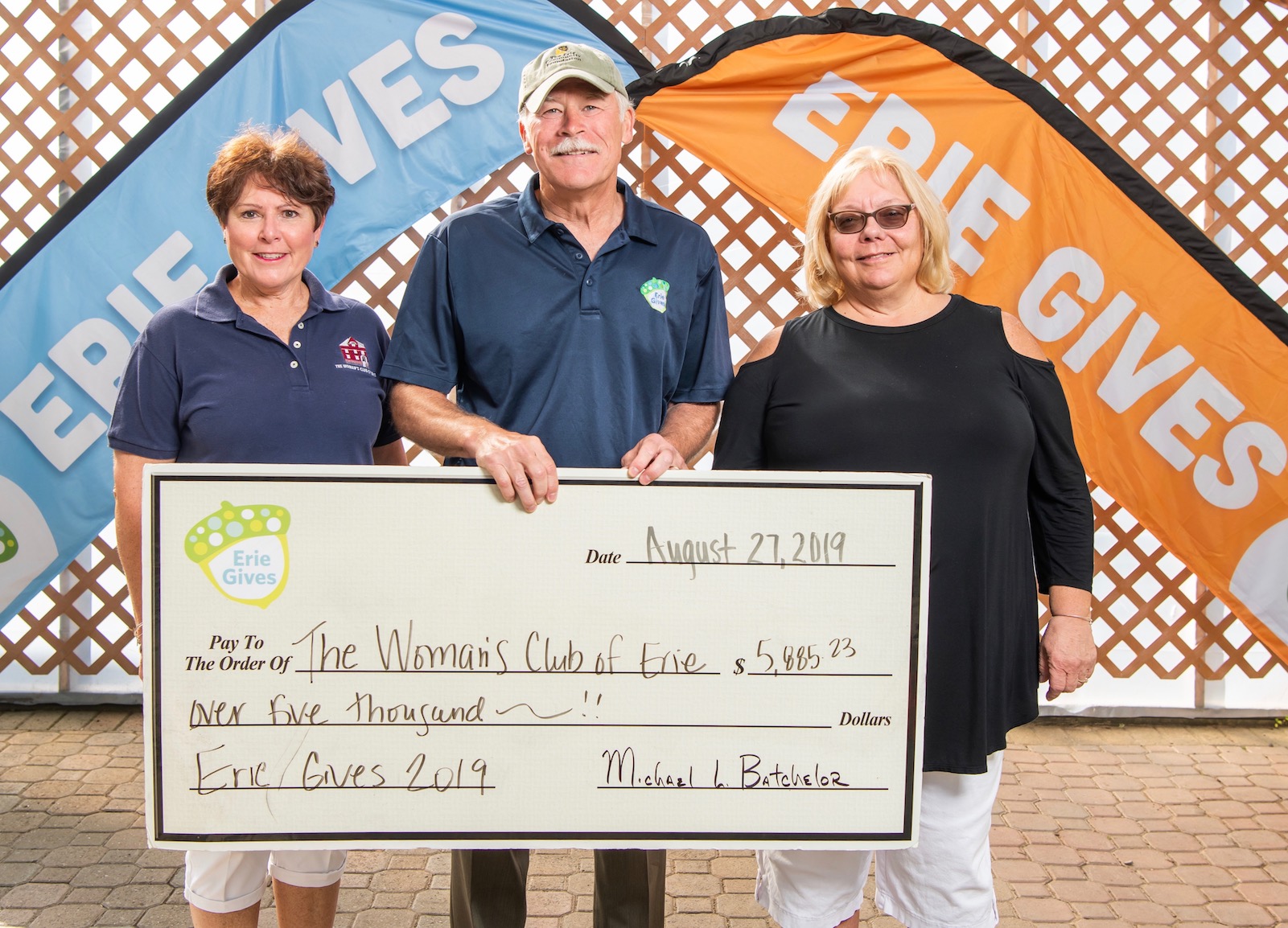 Thank you to all who participated in the Erie Community Foundation’s Erie Gives Day 2019. The Woman’s Club of Erie is grateful for this wonderful opportunity and to all who consider our preservation efforts of our historic clubhouse a worthy cause. Pictured above (left to right) are: Judy Santone Husted, W.C. President, Michael Batchelor, Erie Community Foundation Executive Director, and Marci Cashman, W.C. Treasurer. 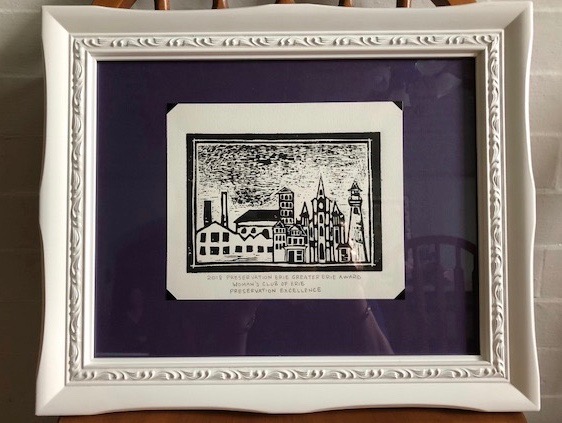 Treasurer Marci Cashman, Grant Writer and Member Melinda Meyer, and President Judy Husted attended a September 14 news conference at the Erie Zoo for the purpose of receiving the good news that the Woman’s Club was chosen as one of the Community Assets Grant recipients. The grant award of $6,522 will be applied to the tuck-pointing estimated at $21,480.00 for the Clubhouse. 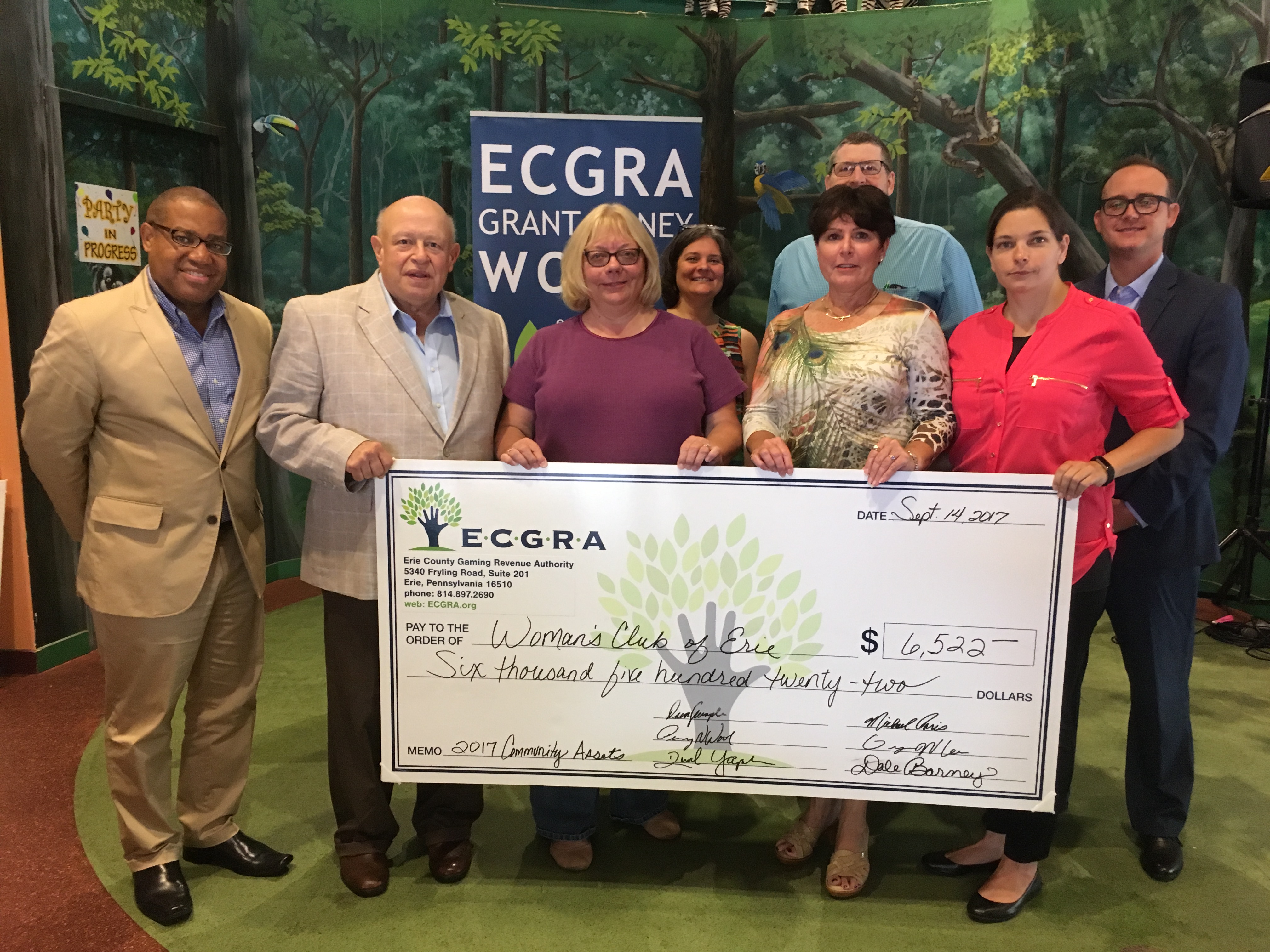 Twelve years ago, the Woman’s Club of Erie began a gradual repair and replacement program on the roof of their 128-year-old clubhouse, the former Davenport and Winifred Galbraith mansion located at 259 West Sixth Street. The mansion was built at a cost of approximately $60,000.00. Located in the historic area on West Sixth Street between Perry Square and Gridley Park, it was selected and given “Significant” status in September 1984.

Initially, Northwest Restoration, Inc., was hired and began repairing the channels and internal gutters (that run in the eaves), and replacing missing or broken red slate tiles. The red slate tiles are harder and more durable than the more commonly used gray slate, thus more expensive.

To date, the north facing section of the roof has been completed and 80% of the eastern side at a cost of $40,000.00. To complete the remaining southern and western portions of the roof estimated at $200,000.00, the Woman’s Club of Erie has initiated a Raise the Roof Campaign.”  To date, $80,000.00 has been raised through events and donations. Anyone interested in contributing to the Raise the Roof Campaign can send their tax deductible donation made payable to The Woman’s Club of Erie to:

The Woman’s Club of Erie

A cardboard miniature of the mansion created by Steve Giewont and decorated by Lainie Addessi is on display and available to receive roof donations. Individuals can sign a paper tile and adhere it to the roof of the miniature. 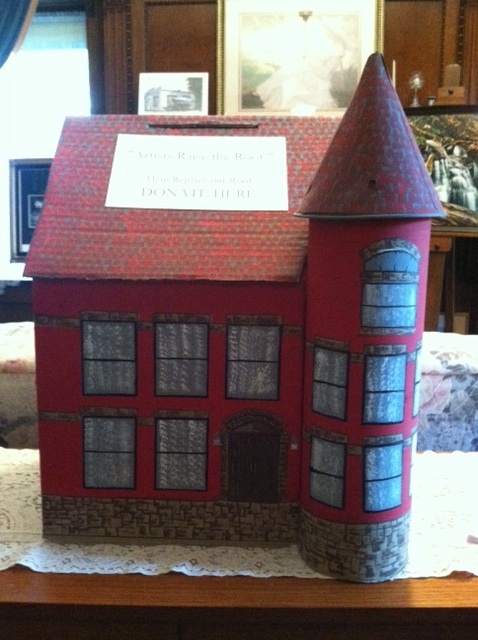 A Brief History of the Organization

The General Federation of Women’s Clubs (GFWC) is an international women’s organization dedicated to community improvement by enhancing the lives of others through volunteer service. GFWC members are in every state and more than a dozen countries. Their goal is to promote civic involvement in their communities, advancing education as well as preservation of the arts and culture all the while promoting healthy lifestyles.

The GFWC owes its beginnings to Jane Cunningham Croly, a professional journalist who in 1890, due to her gender, was denied admittance to a dinner at an all-male press club honoring Charles Dickens. This spurred her to form the famous women’s club, Sorosis – a “centre of unity” that had neither a charitable nor socio-economic purpose, but sought “collective elevation and advancement.” As women’s clubs began forming across the country, they became a center of educational advocacy and a sort of college for older women who wanted to learn.  Croly formed the General Federation of Women’s Clubs in 1890, to support clubs throughout the nation and further their efforts at providing education, improved working conditions, health care, scholarships and other reforms.

Among the many accomplishments of the GFWC are:

The Woman’s Club of Erie is a 501c3 philanthropic organization that aims, through its various fund raisers, dinner and speaker series, to improve the lives of women and children in the Erie community.

The Woman’s Club of Erie began in 1897 and was federated in 1898. Since its beginnings, the organization has been a champion  to numerous civic causes in the Erie community, i.e., the  founding of the Visiting Nurses Association and the Erie Unit of the American Cancer Society in 1945, donating to the Juvenile Diabetes Foundation, Shriner’s Hospital, the Second Harvest Food Bank, House of Healing, Erie DAWN, Erie Zoological Society, Inner-City Neighborhood Art House, The Humane Society of NW PA, The Caring Place and Safe Net–a temporary shelter for abused and displaced women and their children–just to name a few. The mansion, purchased in 1921 from Winifred Galbraith, who was also a Woman’s Club member, is currently utilized as a meeting place for members and events. The Club House is also available for rental opportunities.